Moving to a new country brings many new experiences. While some are expected, others are a pleasant surprise, like my introduction to the heavenly combination of rhubarb and ginger. 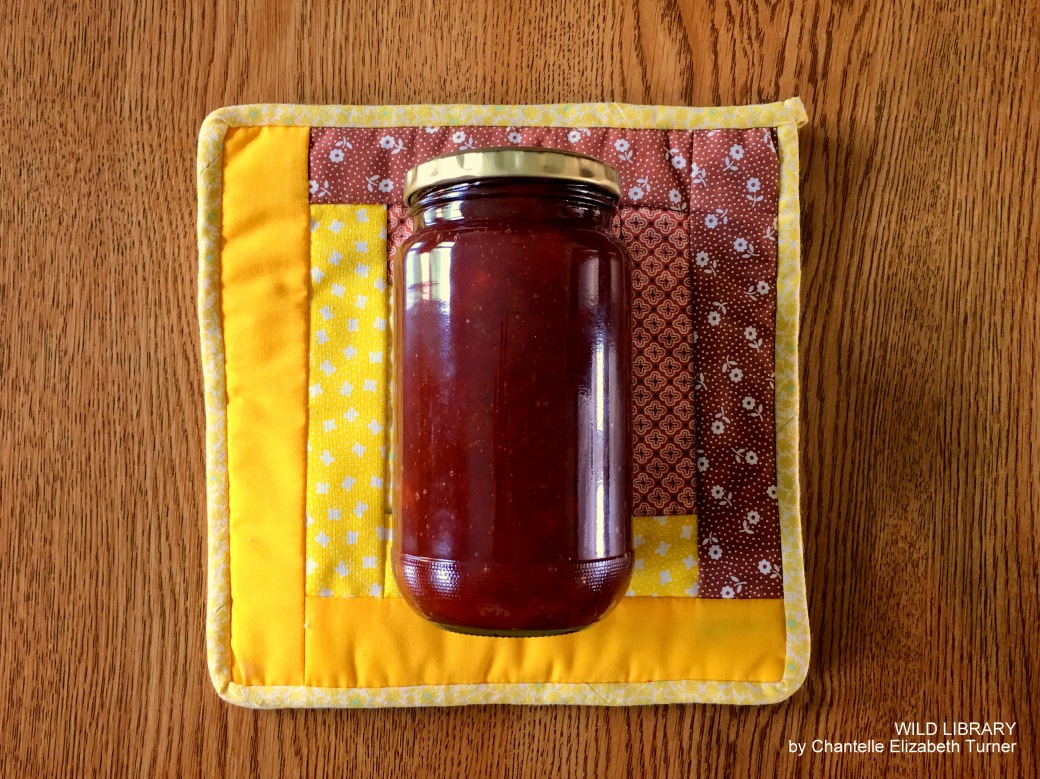 I work at the Animals in Need Charity Shop in Letterkenny. It’s one of many charity shops in town but I’m very proud of our shop. The need for animal welfare and care is never-ending, and the people who dedicate their lives to this cause need all the support they can find.

The principle is simple: people donate their unwanted home wares, toys, books, clothes, and so forth, and we sell them in the shop to raise money for the charity. What we can’t sell, we recycle, and we get a little money for that. We throw away as little as possible.

The charity shop is very much like my Wild Library; you don’t know what you’ll find. It’s a mix of old and new, things that are useful, things that are ornate, items that are priceless, and some that are obsolete. And then there are those rare items that no one knows what they are or what they’re meant to do, but someone  will normally buy them just because it’s so cheap.

One of the reasons I love working in the shop is that I get to meet interesting people. The people who come in to the shop are just as diverse as the merchandise we sell. Some are there to support the charity; if something costs €2, they’ll give you €4. Some are there for the thrill of haggling; if something costs €2, they’ll try to bargain you down to €1, and if something costs €1, they’ll try for 50c. Some come looking for a bargain, others are there to steal, and then there are those lonely souls who are only in for some conversation. They’ll buy something small and spend the next two hours engaging a member of staff in their tales and stories. Old, young, friendly, sour, Irish, and all nations, you will find them all in the charity shop.

Many of these visitors have touched my life in some small way, but one that I’ll always remember is a woman who makes the most delicious jam you’ll ever taste. Let’s call her Rose. With her snowy white curls forming a halo around her head, and blue eyes that hold a lifetime of wisdom, I thought she was well over 90 years old.

I met her on a typical Irish winters’ day. Rose and her husband entered the shop shortly before closing time and, judging by their shopping bags, it looked like they’d reached the end of a long day of shopping. I suspected that they’d wandered in to kill time while they waited for their lift home, like many others who stumble across our little shop.

The husband, old and bent with age, with a face that seemed to show endless patience and understanding, took a seat in the corner. Rose’s face lit up as she looked around. She made a meticulous round through the shop, browsing and asking about prices. I soon learned that she was almost completely deaf, so her husband was constantly repeating the things I said to her. He must have some sort of magic power because no matter how loudly or clearly I tried to speak to her, she would turn around to him, he would calmly repeat what I’d just said, and she would understand immediately.

I should’ve known from the keen twinkle in her eyes that she’d done this many times before. She bargained me down on every single item that she bought, even if it was just 50c off the original price. Normally I’m tough to bargain with; our charity shop is one of the cheapest you’ll find and, after all, all proceeds go to a good cause. But for Rose, I made an exception. She bought so much stuff that we filled three large carrier bags. I could see she was having a really good time; it was all about the thrill of finding a bargain. All the while, her husband waited patiently while his wife shopped for things that I can’t imagine she’ll ever wear or use.

She was so delighted that I’d given her good prices that she took a shine to me. She seemed genuinely interested in me, asking my name and asking about my family and what I’m doing in Ireland. When she learned that I’m from South Africa, she turned to her husband and said in wonder, ‘God bless her, she’s from South Africa!’ I wondered what it meant to her. What did she think South Africa was like? I could only imagine.

She asked if they could wait in the shop until their daughter arrived, as we were meant to close up in a few minutes. I told her it was okay, and that I’d wait with them, even if I had to close up the shop. She assured me that their daughter would be there shortly as she was a very good driver. She then conjured up some teabags from her handbag and had me brew them each a cup of tea while they waited.

Rose asked me, out of the blue, if I wanted jam. I didn’t even have a chance to respond before she went ahead and told me about all the awards that she and her husband had won for their jams; all cooked from fruit and vegetables from their own garden. I didn’t understand half of it, but I was impressed.

I told her I’d love some jam, and then she listed off some flavours for me to choose from. I went with rhubarb and ginger. She took my number and promised I’d get my jam soon.

Their daughter arrived just after closing time and, in Rose’s mind, this confirmed the fact that she was an excellent driver. I was slightly taken aback by their daughter; she looked much older than my grandmothers, which made me wonder if Rose wasn’t closer to 100 years old. They all left in good spirits.

I thought about Rose a lot that weekend, and I wondered about jam and jam competitions.

The following Monday, she was back as promised, and she seemed delighted to see me. She gave me a pot of rhubarb and ginger jam, telling me proudly that it was part of her 2017 batch. She then bought a set of ladybug earrings, and six jumpers, all at a discount.

As she was leaving, she said ‘God bless’, and promised to bring me more jam. It was such a precious gift and I was so touched, but I can’t really find the words to explain why.

Today, I made toast with a little bit of butter and a big spoonful of Rose’s rhubarb and ginger jam. It was, honestly, the best jam I’ve ever tasted. If I had to judge jam in a competition, this one would definitely be the winner, no doubt about it. It was the first time I’d ever eaten rhubarb, and I was won over. Now I’ll be reminded of Rose, with her bright blue eyes and prize-winning jam, every time I eat rhubarb.

If you are curious to learn more about Donegal, you might enjoy the story Life in Donegal where I’ve attempted to paint a picture of this wild and beautiful place. In Unforeseen Challenges, I talk about some of the unexpected obstacles that I’ve had to overcome since moving to Ireland.

If you would like to receive an email notification when a new story is posted, scroll down and click on the Follow Wild Library button on the bottom of this page.

9 thoughts on “Rhubarb and Ginger”