It was our first Halloween in Ireland and winter arrived early that year. The day was cold and grey and a freezing wind whipped across the fields and between the housing estates. The day should’ve been spent relaxing indoors, especially since we were still recovering from a recent trip, but it wasn’t meant to be. 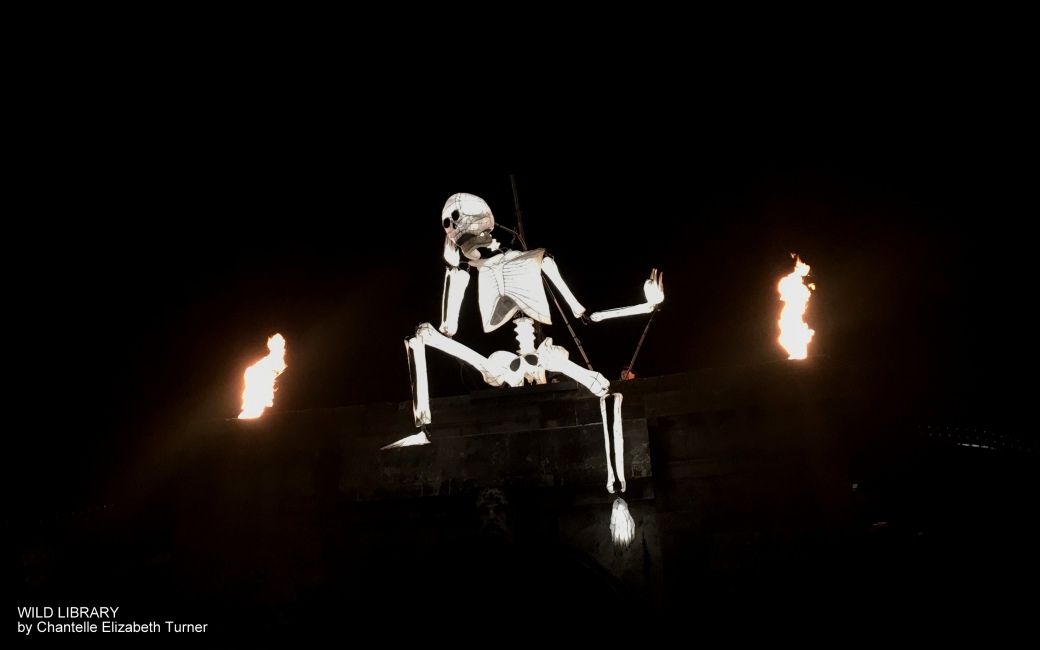 It was about 4PM when I spotted the neighbourhood children playing outside in their costumes and I noticed some of the houses were decorated for the occasion; bloody hands in the window, carved pumpkins, and a reaper flapping about in the wind. I phoned Henry, who was out running some errands, and asked him to get some Halloween candy, just in case. He soon returned home with some home DIY office furniture and a big bag of jelly sweets.

‘I bought something we’d also like to eat,’ he said. ‘If there’s anything left.’

‘Good thinking. I want this one,’ I said and took a packet of tiny teddy jellies. I emptied the rest of the candy into a big bowl.

Henry set about assembling the small desk and I peeked out the window at the kids playing in the street.

‘What if no one comes round to our house because we don’t have any decorations up?’ I thought. ‘On the other hand, it might be nice to have a quiet evening at home, we’re both tired from yesterday’s long journey.’

To my surprise, the doorbell rang, interrupting my inner dialogue.

‘Henry, do you want to come and have a look?’ I asked. He begrudgingly left his DIY project, and we opened the door.

‘What do we have here?’ I beamed, chuffed that they were knocking on my door!

‘Trick or treat!’ the younger of the two repeated uncertainly, as if I hadn’t heard them the first time.

‘And what are you tonight?’ I chirped. I quickly scanned her outfit. Her bare arms were turning pink in the frosty night air and a tiara was balanced precariously on her messy blond hair; it had clearly fallen off and been put back on a couple of times. Her outfit was completed with a slightly worn frilly dress, one that had likely been passed down from her older sister.

‘A princess?’ I guessed, clapping my hands. She nodded shyly, holding out a pumpkin shaped bucket. Her nose was running in two sticky lines into her mouth.

‘And you,’ I asked her sister.

Without thinking, I gave the little girl three packets of candy and her older sister two packets. I still don’t know why I made such a thoughtless decision in the moment, but off they went, looking pleased.  I closed the door, feeling pretty pleased myself.

A few minutes passed before the next knock at the door. It was a small, well-organised group of children who took turns telling me what they were, earning themselves one packet of sweets in turn.

A mom with a toddler in her arms walked up to me. ‘He’s a bear,’ she said dryly.

I smiled and gave him some sweets, wondering if his mother would be eating them herself. They all left in unison, looking content. I felt quite happy; our first Halloween in Ireland was turning out rather well.

A few minutes passed and I watched Henry fiddle with the desk. At the next knock, I grabbed the bowl of candy and made my way towards the door. The doorbell rang. Then it rang again. I hesitated. Multiple fists started beating against the door like small iron hammers, and I heard children laughing and chatting outside. I opened the door slowly…

Children blocked the entire doorway, their painted faces fading into the night. ‘Trick or treat!’ they yelled at me.

‘Oh, hi guys,’ I said with enthusiasm to mask my surprise. Where did all these kids come from?

As if rehearsed, they formed a line to receive their candy, all the while pushing and shoving and chattering away. I had a strong suspicion some of them had already made a dent in their Halloween candy.

‘…one for the princess, and one for the hulk…’ I said as each kid waited for me to drop a packet of jellies into their already full buckets.

Their little faces flashed in front of me, one after the other.

‘… And another beautiful princess, and another Spiderman… Oh, and just look at you!’

The little girl standing before me wore a magenta dress with black sequins,  her hair set in neat curls around her head. She looked like a princess, except for the beard drawn on her face. I had to think fast.

‘And you… You look just gorgeous,’ I gushed, deciding it would be safer not to guess. She flashed me a big smile as I gave her a packet of sweets. Her mother gave me a stern look and they set off.

Only a dinosaur and another Spiderman remained on my porch, and then it was empty and the night was eerily silent.

As I closed the door, panic set in. I only had four packets of candy left.

‘Henry, we’re running out of candy!’ I shouted.

‘Oh?’ he answered from the kitchen.

There was another knock at the door.

I was relieved to see only two faces looking up at me. I quickly gave them each a packet of candy and sent them off without much ceremony.

I only had two packets of candy left! I quickly ran into the kitchen and grabbed the tiny teddies I’d been saving for myself. Three packets left.

‘Trick or treat!’ said a boy in sweatpants and a Scream mask, holding a half-full plastic shopping bag open for me.

‘Minimum effort,’ I thought with irritation, but I sent him off with the packet of tiny teddies, wondering if he’d enjoy them as much as I was planning to. I was down to two packets of candy again and I began frantically searching through the drawers in the kitchen.

‘Henry, do you have anything?’ I asked, knowing he didn’t.

He looked up at me from the desk, only half listening. ‘I don’t think so.’

And then I saw our holiday candy. Chocolates and wafers that had travelled all the way back from Vienna with us. I was so looking forward to eating them in the coming week while reminiscing about our trip…

‘Trick or treat!’ It was four girls in matching skeleton bride costumes.

‘Wow, you all look fantastic,’ I yelled, on the verge of hysteria. ‘And you’re in luck. I saved the best candy for last.’

I watched my chocolates disappear into their already full bags. The girls eyed the treats critically as they walked off, probably wondering if the candy was as great as I was making it out to be.

‘Henry,’ I said, walking into the kitchen. ‘Are you sure you don’t have anything else?’

He shrugged his shoulders sympathetically. I looked at the clock. It was only 6PM! I was in trouble.

The doorbell rang. I walked up to the front door as if to my doom.

‘Trick or treat!’ Three faces smiled up at me; two witches and another tiny Spiderman.

‘Kids, you all look so great,’ I said. ‘But I only have two packets of candy left.’

One of the witches gave me a severe frown. ‘But we’re three,’ she said as if questioning my intelligence.

‘Thank you, thank you!’ I said, giving out the last two precious packets of jellies.

‘Happy Halloween,’ they said, disappearing into the cold night.

I felt deflated. Not being able to give a child with a painted face some candy on Halloween was one of the worst feelings in the world! I couldn’t bear to do it again.

I quickly turned off the porch and hall lights, ran into the living room and killed the light in there. I’d hoped our house would look dark and empty from the outside. It should warn kids: no treats here.

Half an hour went by and I began to relax. Perhaps all the kids had gone home to enjoy the night’s haul? Surely there couldn’t be any more kids in our area! I dished up dinner and as we sat down at the table to eat, there was a knock at the door. My pulse quickened. Another knock, this time more urgent. I looked at Henry, my eyes wide with terror. He must’ve seen my desperation.

‘I’ll deal with it,’ he said, getting up just as they knocked for the third time.

‘Trick or treat!’ sang the chorus as he opened the door.

‘Ahhh…’  the kids sighed in disappointment.

‘Did you eat everything?’ asked a girl with more than just a hint of accusation in her voice.

Henry laughed. ‘No, we ran out a while ago.’

‘That’s okay,’ another one piped up.

‘But you all look fantastic,’ Henry said. ‘What are you all?’

The kids enthusiastically took turns telling him who their alter ego for the night was.

‘I’m sorry about the candy,’ Henry said again. ‘Have a good evening.’

‘Happy Halloween!’ they shouted. I could hear them running down the street to the next house.

‘Thanks,’ I told Henry when he re-joined me at the dinner table.

Word must have spread that we were out of candy because we were left in relative peace for the rest of the evening. After barely surviving our first Halloween in Ireland, I will definitely be better prepared next year!

If you enjoyed this story, consider subscribing to the Wild Library blog.  Scroll down and click on the Follow Wild Library button on the bottom of this page to receive an email notification when a new story is posted.

Wondering what to read next? Try Her name was Lolagh, a short story about a strange man looking for his lost love.